Show Low and the surrounding area finally has its own Orthodox Christian mission church.  Started in 2018, Divine Liturgy has been celebrated in the White Mountain area now for over three years. Off the beaten path, we celebrated Liturgy ‘out among the pines’ in the beautiful forest cathedral provided by nature to glorify God. It is still a beautiful place to worship the Lord! The mission has gone through some changes, the most noticeable is the name! While in the Vicariate for Palestinian/Jordanian churches, the parish was first named St. Peter the Aleut, first martyr in the Americas. Later it was changed to Holy Archangels Orthodox Mission. When the parish came into the Russian Orthodox Church outside Russia, in order to avoid confusion with another Holy Archangels ROCOR Church (in Phoenix!), the name was changed – once and for all – to St. Herman of Alaska, the holy hermit, and glorious wonderworker of Alaska and all America. Originally, in 2018, the Show Low mission was named for the martyr St. Peter the Aleut. Shortly afterwards, the Show Low mission was renamed for the Holy Archangels. Finally, to avoid confusion with a previously existing church named Holy Archangels in Phoenix, the mission was given the name of Saint Herman of Alaska!

Here you will find the schedule of services. Our worship is ancient, and profoundly Biblical. It's like nothing you've ever seen.

How does one begin the journey of a lifetime on the Way of Life?
Find out here. Each class is a live presentation of the topic, allowing for live question, answers, and interactive discussion. 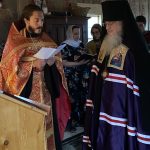 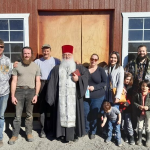 The Chapel of St. Herman arrived this afternoon. Fr. John and Matushka Deborah 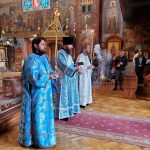